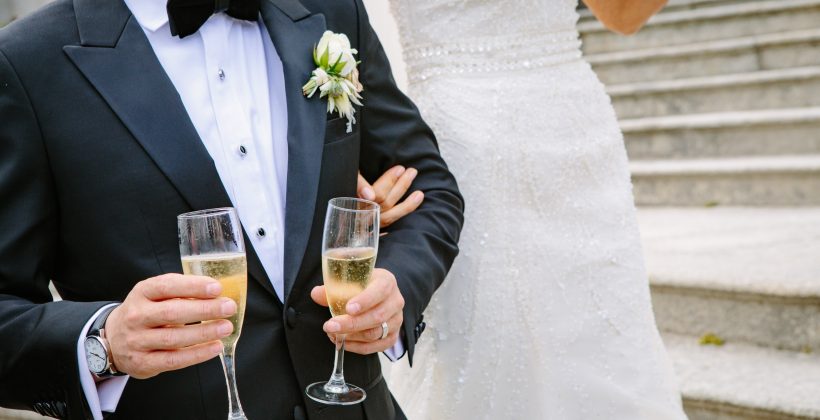 With a new year already upon us, it’s time to start thinking about how you’d like to make 2022 different and better than 2021 (and the other years that came before it).

Some people think that ‘New Year’s Resolutions’ are silly, and just an excuse to push off self-improvement until the next January 1st rolls around.

But there’s also something to be said for the new beginnings that come from making it past such a significant milestone.

And when it comes to self-improvement, it’s important to take personal style into consideration.

The History Of The Tuxedo

Now, the history of the Tuxedo is actually pretty long and involved.

But the short version is that it came onto the scene back in 1865. Prince Edward VII, the Prince of Wales at the time, commissioned an ensemble that was more formal than a lounge suit, that also carried with it a few ‘tailcoat’ design elements.

As a result, the ‘dinner jacket’ was born. And it quickly became a fashion trend.

The Tuxedo’s Place In Modern Style

Nowadays, we tend to think of the tuxedo as the ultimate elegant eveningwear choice for men.

There’s no look that’s quite as ‘excellent’ as a man wearing a tuxedo for a formal occasion.

But it’s also true that American style has changed so much over the past 70 years (especially post World War 2), that sometimes people aren’t completely sure when they should or shouldn’t wear for some types of special occasions.

So in this post, you’re going to learn about some events where you can (and even should) most definitely consider a tuxedo as not only a relevant style option—but also as the default choice for certain types of gatherings and ensembles.

If you want to level up your style and improve your tuxedo game in 2022, then these events should definitely be on your radar as tux-worthy.

Unless otherwise stated, it’s usually a good idea to assume that weddings are going to be black-tie affairs.

This means that a tuxedo is generally the proper style choice for such an event.

In some places (such as in England), tuxedos generally aren’t supposed to be worn until after dark.

But in the United States, wearing a tux during the day has definitely been cleared as an acceptable practice—and even during the day, a tuxedo makes for a fine choice for wedding attendee attire.

Historically and culturally speaking, the theatre and the opera have long been considered the epitome of prestigious live art forms. And as such, viewers are generally expected to dress well when in attendance.

This is another type of event where a tuxedo is not only considered appropriate—but also preferred as a style choice.

Wearing a tuxedo while attending a live theatre or opera production will make you stand out. It’ll label you as a ‘true gentleman of culture,’ and is most definitely a positive and well-respected fashion statement.

Prom is a rite of passage for many young men and women—an opportunity for introduction into the world of graceful, upstanding, and elegant social nightlife.

For this reason, the tuxedo is the defacto prom style choice for men. It’ll empower them to broadcast tones of classiness, elegance, and sophistication.

Choosing the proper tuxedo for prom is also important.

This is a night you’ll look back on for years to come. Choosing the proper look will cement the evening in memory as one of timeless class.

Any official ceremony where you’ll be coming together to pay homage, bestow or receive honors, take up a mantle of official office and/or public or civil responsibility, etc. will generally call for a tuxedo.

Think about the Oscars, Presidential Inaugurations, honors banquets, the dedication of memorials, etc.

Whether you are the focus of such an event or just in attendance, wearing a tuxedo broadcasts a powerful and elegant social message.

It shows the world that you’re a man who takes the meaning behind this ceremony seriously—and that you’re the type of man who’s worthy of respectability in such circles.

Private parties and special events also sometimes call for the wearing of a timeless, classic tuxedo.

Of course, every specific event will be different.

But as a general rule, you always want to stand out and make a statement.

And the best way to do this is by being the best-dressed man in the room.

Well, wearing a tuxedo gives you a lot of social power with which to accomplish this.

It tells others a lot about you without you needing to ‘tell them about you.’

Plus, a classic tux is really coming back in as a style choice in 2022—even at more casual gatherings.

You really can’t go wrong with this one.

There you have it.

5 types of events that may call for the wearing of a tuxedo.

So make 2022 your most memorable year yet, and dress to impress for every occasion. Browse our online shop or drop by Karl’s Tuxedos to check out all the choices available for your next ‘tuxedo-wearing’ event!

Do you have any questions? Drop us a line or stop in. We’d love to help you out.