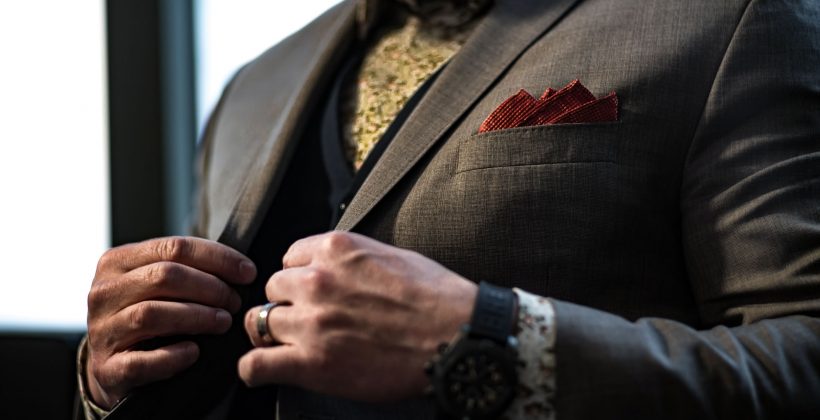 The ‘pocket square’ is basically the small handkerchief that you keep decoratively folded in the top pocket of your jacket or suit coat.

It serves as a means for adding an extra touch of ‘flair’ to the overall look of the suit.

Even though pocket squares are legitimately made from actual handkerchiefs, they’re not actually made to be used as handkerchiefs.

Their entire purpose is to elevate the look of your jacket.

But where did they come from? And why do we use them today?

And which folds work best for different types of situations?

These are great questions. And actually, there are some interesting traditions associated with these little squares of fancy fabric.

Let’s dive into it and talk about it.

The Origin Of The Pocket Square

According to Rampley & Co, many believe that the pocket square was actually first used in ancient Egypt.

According to legend, these small cloths were made of linen, and were dyed with a red powder.

They were believed to be signs of wealth, and used for decorative purposes.

The ancient Greeks also carried similar cloths. They would even scent them with perfumes.

The Romans had a similar tradition. It was even said that the emperor would begin the gladiatorial games by ‘dropping his handkerchief!’

Of course, while these are all probably traditions that influenced the ‘pocket square’ as we know it today, it didn’t really start to take its true form until the 1400s. During these years, pocket squares were used for style and utility.

They were sometimes embroidered with beautiful patterns, and were made of many different types of exotic fabric.

They evolved over time—and today, we still use them—albeit more as a fashion accessory than as an actual utilitarian handkerchief.

How To Use A Pocket Square

There are actually many different ways to fold a pocket square.

And some of them are definitely more challenging than others.

You can learn how to fold several of the most iconic folds in this YouTube video by Real Men Real Style.

Let’s take just a moment to talk about the most popular types of folds, and when they’re supposed to be used.

This is the most ‘formal’ pocket square fold. It’s also one of the simplest to create, and one of the most elegant options. It’s perfect for job interviews, formal events, black tie events, etc. It’s typically created with a plain white handkerchief.

This slightly ‘flashy’ look is a bit more difficult to achieve. But don’t let the ‘fanciness’ fool you! This fold is best used in more casual settings—though you can use a handkerchief of just about any color to create it.

This fold is basically achieved by gathering the handkerchief at the middle, pulling the middle to a point, and folding it in half. It’s quick, easy, and casual—and you can use handkerchiefs of just about any color or style to achieve the desired look.

This fold is classy and sophisticated. If you’re looking for something that’ll look a bit fancier than the presidential fold, this may be your best bet.

This fold is best used for casual occasions—but it actually looks quite fancy, and is bound to elicit some compliments! Try out this fold if you really want to stand out with a more ‘bold’ pocket square look.

When Should You Wear A Pocket Square?

As a general rule, you’ll want to wear a pocket square whenever you’re wearing a suit coat, jacket, or tuxedo jacket that has a pocket—and you’ll always want to make use of them for formal and semi-formal events.

As a general rule of thumb, there really isn’t a jacket-and-tie event where you wouldn’t want to wear a pocket square.

This should be a common staple for men who regularly wear suits, jackets, coats, and tuxedos.

For the most part—you’ll never want to leave home without it!

Hopefully, this blog post has helped to provide some interesting and important information about the pocket square.

If you need some additional information, and/or if you’re interested in securing your next tuxedo rental for your next formal event, please don’t hesitate to stop by or give us a call.

We’d love to help you out!